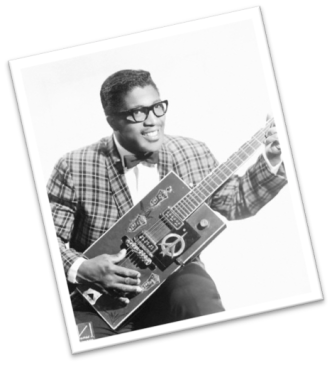 Gretsch is famous for its unconventional guitar shapes, and at least a few of these are owing to an unconventional player: rock and roll singer (and one of the only human beings ever to have had a beat named after him) the late Elias Otha Bates, aka Bo Diddley.

Bo Diddley is a vastly important figure in the history of rock and roll. If you want to see someone well and truly in command of an audience, watch this clip of Bo in 1965. How someone who looks like Urkel’s uncle can be so dignified yet so primal is a rock and roll mystery.

The rectangular guitar above was one of Bo’s own designs. He wanted a guitar shaped like the ones he had made from cigar boxes and played as a youth. Below, you see another Bo design, the Jupiter Thunderbird (which is now known as the “Billy-Bo” because of its association with Bo but also with Billy Gibbons of ZZ Top).

There was a third design born of Bo’s collaboration with Gretsch: the Cadillac (Gretsch already had a relationship with the marque, using “Cadillac Green” as a color for its Country Club model). It was a favorite guitar of his first female rhythm guitarist, “The Duchess.”

Call it autumn of 1986. I was walking alone down a street in Copenhagen (yes, Denmark) one morning, minding my own Scandinavian business. Around the corner, about twenty feet away, a group of men emerged, laughing and American. In the center, a mountain of a man wearing a cowboy hat with a feather band was smiling broadly and telling a story. After a split second, my twenty-year-old brain fired, and without thinking I blurted out: “Bo Diddley! I love you man!” Without missing a beat or saying a word, the man shot his finger-guns at me and smiled (did he wink?), and walked on. It remains one of the proudest moments of my life. 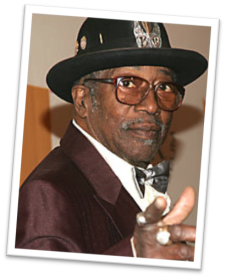